Gene therapy efficacy for LCA: Improvement is followed by decline in vision

Gene therapy efficacy for LCA: Improvement is followed by decline in vision

Gene therapy for Leber congenital amaurosis (LCA), an inherited disorder that causes loss of night- and day-vision starting in childhood, improved patients' eyesight within weeks of treatment in a clinical trial of 15 children and adults at the Scheie Eye Institute at the Perelman School of Medicine at the University of Pennsylvania. New results involving a subset of patients from the ongoing trial show that these benefits peaked one to three years after treatment and then diminished. The findings are published in The New England Journal of Medicine. 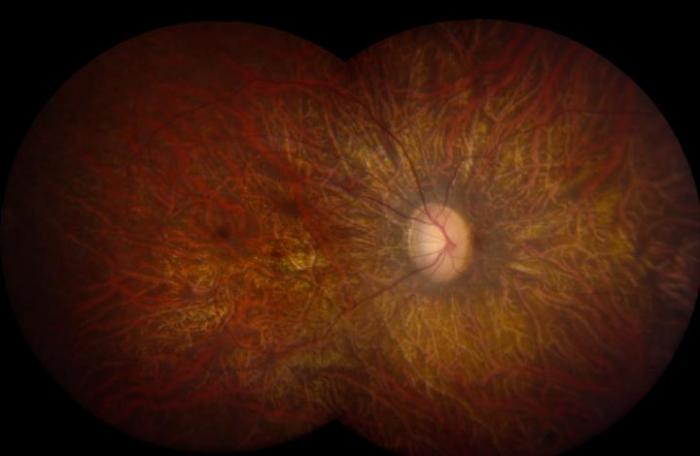 LCA is an inherited disorder that causes vision loss in childhood. It primarily affects the functioning of the retina, the light-sensitive tissue at the back of the eye, as shown here.
Credit: National Eye Institute

In the new study, the research team reports long-term follow-up from three of the earliest treated patients among the initial cohort of 15 patients who received the investigational therapy. The patients underwent extensive tests of their vision and imaging of the retina from baseline beginning prior to their treatment and for up to six years after treatment. These in-depth examinations, which are not likely to be performed in later Phase trials, revealed that this cohort's vision rapidly improved and slowly expanded and then slowly contracted.

“This study shows that the current therapy doesn't appear to be the permanent treatment we were hoping for, but the gain in knowledge about the time course of efficacy is an opportunity to improve the therapy so that the restored vision can be sustained for longer durations,” said lead author Samuel G. Jacobson, MD, PhD, a professor of Ophthalmology and director of the Center for Hereditary Retinal Degenerations and Retinal Function Department at the Scheie Eye Institute at Penn.

Mutations in the gene RPE65 cause LCA in about 10 percent of patients. The gene produces a protein critical for vision that is found in the retinal pigment epithelium, a layer of cells adjacent to the light sensors or photoreceptor cells of the retina. In the retina, millions of photoreceptors detect light and convert it into electrical signals that are ultimately sent to the brain. Photoreceptors rely on the RPE65-driven visual cycle to recharge their light sensitivity. They also need RPE65 for their long-term survival. In LCA, the cells eventually die, halting eye-to-brain communication, and with that, the patient's vision.

Jacobson along with co-investigators Artur V. Cideciyan, PhD, a research professor of Ophthalmology at Penn and William W. Hauswirth, PhD, Professor of Ophthalmology of the University of Florida at Gainesville, first began their gene therapy clinical trial in 2007. In the trial, people with LCA received retinal injections of a virus engineered to deliver instructions to the retina to produce a healthy version of the gene RPE65. Within days of the injections, some patients reported increases in their ability to see dim lights they had never seen before.

In addition to the rapid onset of greater light-sensitivity, the researchers discovered slowly developing changes to another component of vision: Four of the 15 initial patients started relying on an area of the retina near the gene therapy injection for seeing letters. Normally, the fovea with its high density of photoreceptors is reserved for seeing fine details.

In the three patients studied here, Jacobson and team observed that the treated region not only gained in visual sensitivity in the early months after therapy, but there was an unexpected increase in area of efficacy over many years. Long-term followup was achieved by mapping the area of increasing vision. Unlike previous reports that this type of therapy provides a ‘one-time cure', the detailed analyses indicate that there is a peak improvement, but there is a subsequent long-term decline in efficacy.

The researchers also confirmed their own finding of unrelenting loss of the photoreceptors in the retina in both the previously treated and untreated areas. The diminishing thickness of the photoreceptor layers pose an interesting contrast to the visual data. Whereas cells are lost steadily over the long post-treatment times, the visual gain has an obviously different natural history – improvement, more improvement and then decline. “Our earlier results and these new measurements showed that photoreceptors continued to die at the same rate as they do in the natural course of the disease, regardless of treatment,” said Jacobson. His team concluded that gene therapy with RPE65 boosted the visual cycle, but did not delay photoreceptor cell death.

“These findings suggest a number of potential strategies for improving the outcome of gene therapy,” Jacobson said. “For example, the ability to stage the disease prior to gene therapy would help clarify the potential benefits for each individual. The treatment could then be guided to retinal areas that contain enough functional photoreceptors to respond.” Select patients, the researchers suggest, may benefit from a second round of gene therapy or an adjacent area of the retina treated, or from combining gene therapy with other medications designed to improve the functioning of the visual cycle or protect the retina from loss of cells.

“We've been able to positively alter and extend the visual life of patients with LCA, and we now have to develop workable strategies for extending it even further,” Jacobson said.

About the Author: Ben Thomas